Paris, Normandy And The Loire 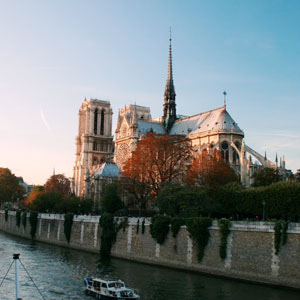 This northern France tour is the perfect way for value-minded travelers to see the highlights of Paris plus the Loire Valley and Normandy. Beautiful scenery combined with famous landmarks and fascinating history sum up this tour.You’ll visit some of northern France’s interesting and charming towns, including Rouen, best known for its connection to Joan of Arc. Here, step into the splendid Gothic cathedral, which was once the world’s tallest building and the subject of a series of Claude Monet’s paintings, just like the water garden in Giverny, depicted in some of his most famous canvases. Visit Honfleur, a romantic port city; Rennes, with its traditional, colorful timber-framed houses; Blois, a picturesque town with its renaissance castle located in the town center; and Chartres, famous for pilgrimages to its 13th-century gothic cathedral. In Bayeux, follow the story of the Norman conquest of England in 1066 depicted on the Bayeux Tapestry, listed by UNESCO. Admire the cathedral, ramparts, and ancient walls in St. Malo, a fortified seaside resort. World War II history comes to life as you visit the American Cemetery at Omaha Beach and the landing beaches. Other highlights of this affordable France tour include picturesque Mont St. Michel, situated on a rocky isle with its world-famous abbey that has been a pilgrimage spot for centuries. Spend a day at leisure in the Chteaux Country with the opportunity to take an optional excursion to visit the Chteau of Chenonceau, a 16th-century, fairytale castle with a moat, drawbridge, and towers. From the historic sights to the picturesque scenery, this is a dream vacation!

As the French capital, Paris is the commercial, financial, and industrial focus of France, a major transportation hub, and a cultural and intellectual center of international renown. A beautiful city in which tourism is the main industry, Paris is cut by the Seine River. On its stately, formal right (northern) bank are many of the most fashionable streets and shops, and such landmarks as the Arc de Triomphe, Place de la Concorde, Louvre, and Sacré Coeur.

The left bank houses governmental offices and is the site of much of the city’s intellectual life. It is known for its old Latin Quarter and for such landmarks as the Sorbonne, the Luxembourg Palace, the Panthéon, and the modern Pompidou Center (see Beaubourg). The historic core of Paris is the Île de la Cité, a small island occupied in part by the Palais de Justice and the Cathedral of Notre-Dame de Paris. Above the city rises the Eiffel Tower. Paris is divided into 20 arrondissements (boroughs) and governed by a mayor.

A fishing village when it was conquered (52 B.C.) by Caesar, it became an important Roman town. It was a Merovingian capital in the 5th cent. and became the national capital with the accession (987) of Hugh Capet, count of Paris. It flowered as the center of medieval commerce and scholasticism but suffered severely during the Hundred Years War. Paris consistently displayed a rebellious and independent spirit, as in its resistance to Henry IV (1589-93); the first Fronde (1648-49); the revolutions of 1789, 1830, and 1848; and the Commune of Paris (1871). During World War II it was occupied (1940-44) by the Germans but was relatively undamaged.