The Canadian Rockies With Alaska Cruise 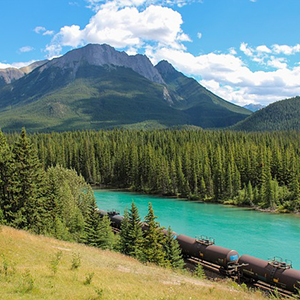 Canada’s national parks and scenic drives highlight this wonderful Canadian Rockies tour that overnights in Vancouver, Kelowna, Banff National Park, Jasper National Park, Sun Peaks, Whistler, and Victoria. Plus, you’ll enjoy a 7-night Alaska cruise where you’ll witness the amazing Inside Passage, one of the world’s most picturesque sea lanes with unbelievable beauty. You’ll spend time in Banff National Park, with its valleys, mountains, glaciers, forests, rivers, and meadows, and Jasper National Park, with its majestic mountains and abundant wildlife. Other Canadian national parks on this tour include Glacier National Park, with its rugged mountains, glaciers, and waterfalls, and Yoho National Park, with its vertical rockwalls, waterfalls, and beautiful peaks. In addition to national parks, you’ll also visit some of Canada’s most popular resort towns on this Canadian Rockies tour. In the resort city of Kelowna, attractively set on the shores of Lake Okanagan and surrounded by orchards and vineyards, enjoy a winery tour. In the mountain resort of Sun Peaks, you’ll overnight after a beautiful drive that includes passing Mount Robson, the Canadian Rockies’ highest mountain at 12,972 feet. Spend two nights in Whistler, host of the 2010 Winter Olympics. A tour highlight is a stop at the Columbia Icefield, the largest expanse of ice in the Canadian Rockies. Here, you’ll ride the Ice Explorer that travels on ice that is 1,200 feet thick. You’ll also travel to the Pacific Coast, where you’ll sail across the Strait of Georgia to Victoria for a sightseeing tour, two overnights, free time to discover some of Victoria’s most popular attractions, and a visit to Butchart Gardens, rated as one of the most beautiful gardens in the world. For the value-minded traveler, this Canadian Rockies tour with an Alaska cruise is a dream vacation!

Would you believe, Joe Juneau? It’s true–Juneau, Alaska is named for Joe Juneau, one of a trio of explorers who discovered rich reserves of gold in the stream that now runs through town. The stampede thatolwed led to Juneau becoming first a camp, then a town, then finally Alaska’s capital. Today, the town boasts some of Alaska’s most fetching scenery. Nestled at the foot of Mt. Juneau in the Alaskan Panhandle, it faces the water from the mainland side of Gastineau Channel. Several magnificent fjords are located along the channel coast and the majestic Mendenhall Glacier,
a favorite of visitors, is nearby.

“Spread wings of a prostrate eagle.” As any Ketchikanian will tell you, his is the meaning of their town’s name. It comes from the eagle-wing sppearance of water flowing over an unusual rock formation which can be seen in the Ketchikan Creek.

To own originated as an Indian fish saltery and grew to become the largest salmon-canning center in the world. The real growth came with the gold rush of 1898, when the town served as a supply center for wourld-be millionaires. of the town’s colorful past is still in evidence, especially at the Indian villages, which are renowned for their colorfully carved
totem poles and fascinating legends.

“There’s gold in them thar hills.” Well, there was, anyway, back in 1898, and as thousands of gold-crazed adventurers headed north, they found the furthest north they could get was the northern tip of the Lynn Canal. That’s how Skagway was born.
Nowadays, local park rangers interpret and re-create that remarkable era for visitors. Stores, saloons, brothels and wood sidewalks have been completely restored (not all of these are functioning, of course). Today Skagway is a jumping off pointfor those seeking scenic adventure and historical knowledge.

Located in southwestern Washington state, Vancouver is a port at the head of deepwater navigation on the Columbia River, opposite Portland, OR. Vancouver is a commercial, manufacturing and shipping center.

British, and darn proud of it.

The shops are stocked with Harris tweeds, Irish linens and Scottish woollens. The locals play croquet, double-decker buses wend their way through the well-kept streets, and afternoon tea is served daily at the Empress Hotel.

In fact, genteel Victoria, British Columbia so closely resembles an English seaside town that it almost seems out of place among the majestic snow manteled mountains and cedar forests that surround it. This juxtaposition, of course, only
adds to its charm.